AUBURN UNIVERSITY, Ala. – Owls are some of the most fascinating creatures in nature. Each species is equipped with its own unique set of characteristics and mannerisms. Alabama is lucky to have several species commonly found in the state, each bringing something different to its environment. The great horned owl, the barn owl, the eastern screech owl and the barred owl are the four species most commonly found in the state.

Collectively, owls have several characteristics that make them excellent hunters. An asymmetrical ear placement allows them to use sound to find their prey. Their feathers also help them capture prey. The feathers have slots that let wind pass through, so they are silent in flight.

Bence Carter, an Alabama Extension wildlife and natural resources regional agent, said one of the most interesting features about owls is their eyes. Owls eyes are located on the front of their face, allowing for better focus on objects.

“Owls do not have traditionally shaped eyeballs. Instead, their eyes are tubular shaped and in a fixed position that prevents movement within the eye socket,” Carter said. “Their tubular eyes restrict their field of view. However, it is made up by the flexibility in their necks.”

Owls have three eyelids: an upper, a lower and a horizontal. The upper eyelid is used when they blink, much like humans. When owls sleep, the bottom eyelid closes upward. The third eyelid closes diagonally from inside to out to help clean and protect the owl’s eyes while they catch their prey.

“An owls’ hearing is very attuned to high frequency, such as prey moving through leaves,” Carter said. “Their recognizable facial disks are also a special adaptation for hearing. These disks are made up of tight rows of feathers that channel sound directly into their ears.”

Carter said an owl’s diet depends on the species.

“Small owls, such as the screech owl, feed on everything from insects to mice,” he said. “Larger species, such as the barred owl or great horned owl, eat squirrels, rabbits, and other larger animals.” 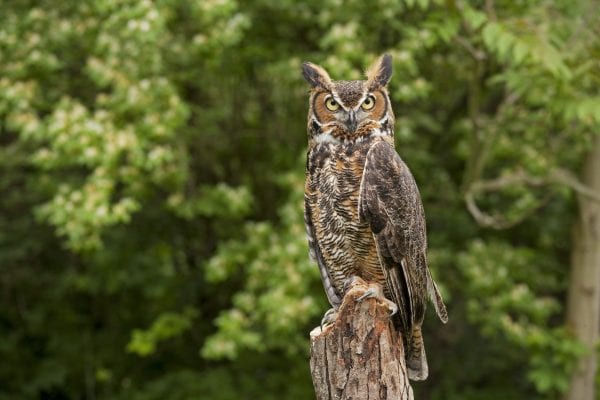 When people picture an owl, they often think of the great horned owl. They have a wingspan of 48 to 60 inches and weigh between 2 and 3.8 pounds, making them the largest owl species in Alabama. The great horned owl has a white throat and has brown with gray mottling on its back and breast.

Carter said these owls occupy a variety of habitats.

“Most great horned owls are seen in open woodlands or trees that have regrown after being cut,” Carter said. “Often, these owls take over abandoned hawk or crow nests instead of building a nest.”

Great horned owls usually spend most of the day perched in a protected area or tree. They are active mostly in the early evening and early morning hours. 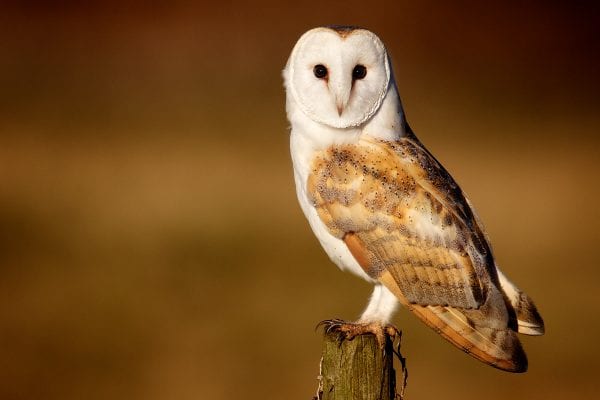 As their name implies, people often find barn owls in the loft of a barn. These owls only hunt at night and prefer open country land for hunting. Because they feed almost entirely on rodents, these owls are often found near fields, farmyards, grain elevators and in other areas that may attract mice and rats.

This owl has a white to light cream-colored breast and belly and may have brown spots. Their back is pale-yellow with streaks of gray. Their most distinctive feature is their heart-shaped face. It is white, with dark black eyes and their beak almost disappears in the feathers. 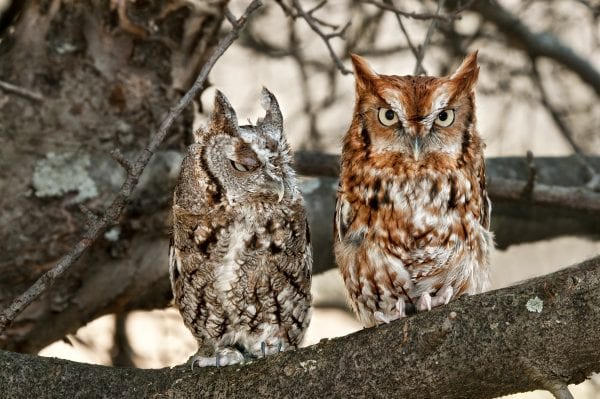 Weighing in between 5.9 and 6.8 ounces, the Eastern screech owl is the smallest owl in Alabama. Small but feisty describes it well. They are surprisingly aggressive for their size and can take down prey as large as themselves. 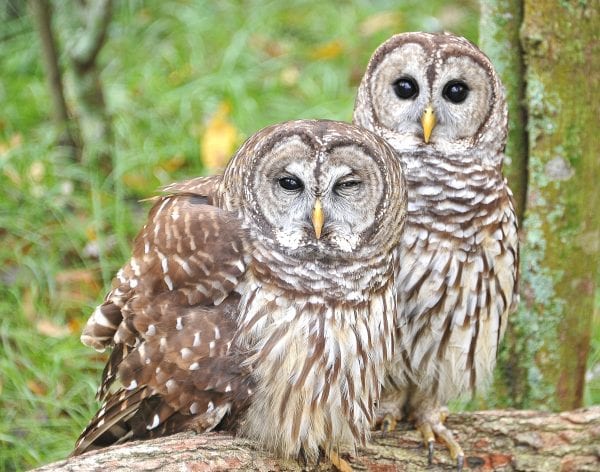 The most distinguishable thing about barred owls is their wide range of noises. Their most familiar noise is the hoot, which has five syllables and sounds like someone is saying, “WHO COOKS FOR YOU, WHO COOKS FOR YOU ALL.” People can often imitate this call and get a return call from an owl.

Barred owls nest in natural tree cavities or take over old hawk nests. These owls seldom build their own nest. Barred owls commonly live in swamps and marshes. They may also be seen or heard in wooded areas in neighborhoods. Barred owls are more active at dawn, dusk and night, but can be active during the day.