Do the names “Juul” or “Hookah” mean anything to you? They didn’t mean a thing to me, at least until I started listening to Extension Family and Child Development agents Sallie Hooker and Synithia Williams who serve Bibb County. And seeing social media and national news report of young people suffering and dying from vaping.

So what are they? I’m not sure I completely understand yet. In a nutshell they are devices that allow people to vape, which is to breathe in nicotine flavored by fruit and other sweet flavors mixed with chemicals, as a substitute for cigarette smoking.  Ask the middle or high school student in your family or neighborhood and I’d bet they can explain it better!

Also, take a look at the following interview Extension Specialist and Auburn University associate professor Dr. Adrienne Duke, which will give you a research perspective on this problem and what can be done about it.  After the interview is a photo and caption showing Flowers presenting to West Blocton Middle School students on the dangers of vaping. 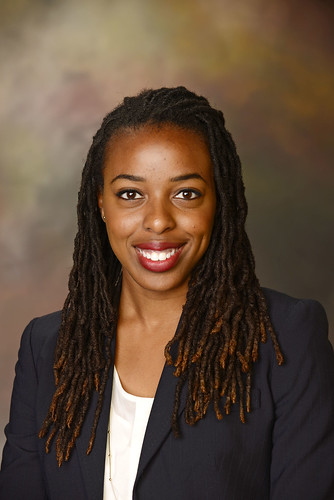 Adrienne M. Duke, an associate professor in the human development and family studies and Extension specialist at Auburn, conducts research on youth behaviors and education. She has been on faculty in the College of Human Science and a specialist with Alabama Cooperative Extension System since 2013. Duke earned her master’s and doctorate degrees in human development and family studies from the University of Wisconsin-Madison.

How does your research involve young people and e-cigarettes/vaping?

Because of my role as an Extension Specialist, I am evaluating a vaping prevention program called Escape Vapes. Extension’s Family and Child Development regional educators are doing vaping prevention programming for middle school and high school students across the state of Alabama and we are assessing the changes in youth attitudes and beliefs about vaping. The other research I am engaged in involves Dr. Linda Gibson-Young in the School of Nursing. We are examining adolescent and college-age students and their vaping use, beliefs, behaviors, and health outcomes.

What have you and Gibson-Young discovered from your work together?

College students are vaping at much higher rates than we thought. The majority of students surveyed responded that they believe electronic nicotine delivery devices are less harmful than cigarettes, so there is a misunderstanding around these devices. It’s also the same for the general public.

You say that parental/family awareness is low around the electronic nicotine delivery devices, as well. What would you attribute that to?

Vaping is relatively new, growing in popularity since 2017. Parents who don’t smoke, typically don’t know what these devices look like. Most parents here vapor and think of water, not chemical aerosols. Furthermore, some devices are designed to be easily hidden and mimic the look of other devices, like flash drives, watches or droppers.

What would you say is the biggest risk for young people who vape?

Addiction to nicotine at an early age, which has effects on brain development, as well as lung damage and respiratory illnesses. They actually recently named this infection EVALI (or e-cigarette or vaping product use associated lung injury).

I think education is very important. Many adults and youth don’t understand what they are inhaling or how e-cigs work. In particular, youth often don’t understand what nicotine can do to the body and brain. I really think if youth understood better that they are breathing in an aerosol of nicotine, ultra-fine particles, volatile organic compounds and other toxins, they would be less likely to say that it’s harmless. Many youth think vaping is relatively harmless, but education changes that perception. While education may not completely eliminate use, it would definitely reduce the number of people smoking and those who try for the first time.

Some cities and businesses have forbid the sale of e-cigarettes to youngsters. Is this enough to stop or even slow down the outbreak?

While this is a great first step, younger adolescents who vape can get it from online stores, as well as older peers and relatives.

Recently, e-cigarette maker Juul said it would stop selling its fruit-flavored e-cigarettes, but would continue to sell mint, menthol and tobacco flavors. What are your thoughts on this news?

Juul is only one brand. There are currently around 460 different brands out there. Also, just keeping mint, menthol and tobacco flavors may prevent some kids from trying it, however, the data does suggest that mint and menthol are popular flavors. When you look back at the traditional cigarette data, tobacco companies added menthol to make cigarettes seem less harsh and appeal to a younger audience. So I’m not sure that leaving mint and menthol as options is the best. Also, the news just reported that unregulated counterfeit products are now on the market to capitalize on Juul taking its flavors off the market. This will cause issues.

What else can be done?

All of the flavors should be banned. The sweet and minty flavors draw young people in. It is why traditional cigarettes and cigars/cigarillos introduced flavors years ago. Since companies purport that electronic cigarette were mainly for adults to stop smoking traditional cigarettes, it should only be in tobacco flavor. Policy makers and the FDA are realizing that more restrictions need to be put in place and that is great.

Vaping-related illness has been in the national news quite a bit recently, and Alabama recently documented its first vaping-related death.  Alabama Extension is making anti-vaping education a major priority in schools statewide, including in Bibb County.  Family and Child Development regional agent Synithia Flowers is shown in this photo presenting the dangers of addiction and vaping to 7th graders in Mrs. Cami Hammond’s class at West Blocton Middle School (WBMS).  All four (4) grades at WBMS will receive the program by December, and Family and Child Development agent Sallie Hooker will provide the same anti-vaping program to all four grades at Centreville Middle School in the spring semester.