Home Featured Blogs Get a Grip on Summer Garden Pests

AUBURN UNIVERSITY, Ala.—An influx of garden pests is every gardener’s worst nightmare. Some pests can take a lush green garden and quickly undo the gardener’s hard work by damaging leaves and produce.

Alabama Cooperative Extension System entomologist, Katelyn Kesheimer said home gardeners should have a proactive pest management plan in place before the seeds go in the ground. While it is a little late in the growing season to develop a proactive plan, there are still other things that can be done to control garden pests.

Kesheimer recommends creating an environment where beneficial insects can thrive. Having a yard that is welcoming to these insects can provide free biological pest control throughout the year. Gardeners can do this by growing plants that provide supplementary food sources—like nectar or pollen—for predators that will feed on garden pests once they arrive.

Kesheimer also recognizes the importance of chemical control options for pests that cause damage in a garden.

“When using chemicals, only use the label rate and avoid broad spectrum insecticides that will kill the beneficial insects,” Kesheimer said. “Remove diseased or severely infested plants from your garden so they don’t act as a source of more pests. Scout your plants regularly so you know what insects—good and bad—are present to determine if action is necessary.”

The following are some of the common insect pests commonly found in the gardens. 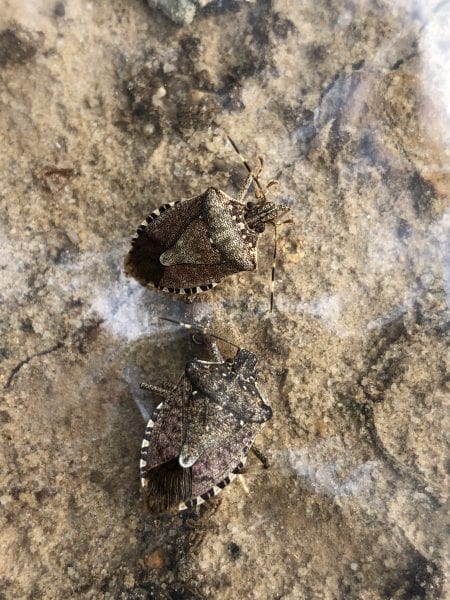 “Peas, tomatoes, beans, sweet corn and peppers are some favorite food sources for stink bugs in the home garden,” she said. “Stink bugs rarely feed on squash and melons, but other pests, like the squash vine borer, will certainly fill that role.”

Stink bugs overwinter as adults and will move into plants in the spring in order to feed and mate. There can be several generations of stink bugs each year, so their populations only increase throughout the summer, with the highest numbers occurring in the late summer months.

“Netting may be used for crops like tomatoes and peppers that are very susceptible,” Kesheimer said. “Get these in place early before the plant starts fruiting and make sure it is sealed all around so the bugs cannot get in.”

For small gardens and low pest numbers, hand removal of stink bugs is an effective approach. However, hand removal should happen early in the day and on a regular basis.

“Insecticides are the best control method for stink bugs,” she said. “Since there are many generations of stink bugs that move in over the course of the summer, you’ll likely have to treat multiple times. The most useful chemical controls are products with bifenthrin or permethrin.” 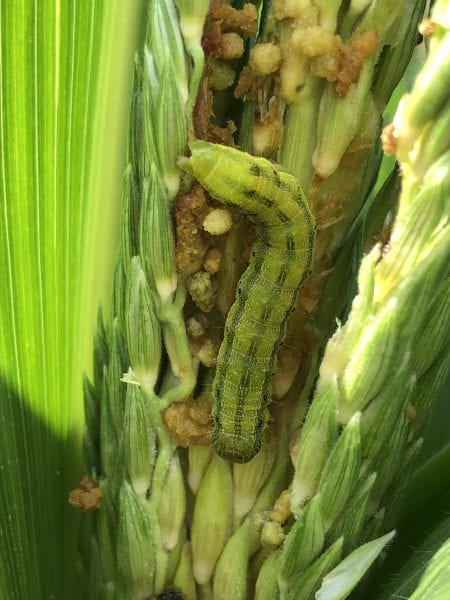 “While corn is obviously the preferred crop, tomatoes are also a favorite,” Kesheimer said. “Corn earworms feed on other crops including peas, peppers, spinach,
squash, watermelon and okra.”

Corn earworms will burrow into developing ears of corn through the tips. Selecting a sweet corn variety with good tip coverage by husks will help keep them out.

“Products containing Bacillus thuringiensis (Bt) are effective on small caterpillars,” Kesheimer said. “It is important to scout for this pest because once the caterpillars get bigger, they are feeding more and hard to kill with chemical control.”

Keep in mind that late season crops are at higher risk because there are more corn earworm moths in the area. Planting early or on time will reduce the populations in the garden.

Kesheimer said she personally battles squash vine borers on cucurbits in her garden, as they are a difficult pest to keep at bay. Squash vine borers are clear-wing moths that lay tiny eggs on plant stems. Once the eggs hatch, tiny larvae burrow into the stem to begin feeding.

“The best way to control is to use fine insect netting to keep out the adults,” Kesheimer said. “Squash planted in the late summer or fall usually suffers less damage.” 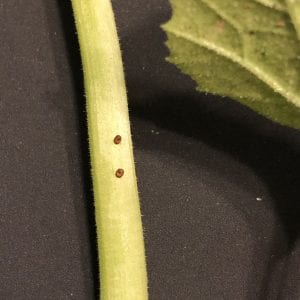 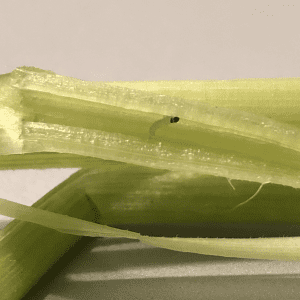 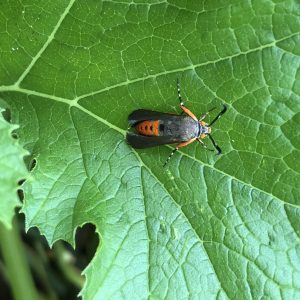 It is no secret that tomatoes are likely one of the Southern gardener’s most treasured bounty. Kesheimer said corn earworm and brown marmorated stink bugs are the pests most likely to cause damage to the tomato plants.

“The brown marmorated stink bug is relatively new to Alabama, but it feeds on multiple fruits and vegetables,” she said. “Most of the damage will be cosmetic, so the tomato is still consumable.”

Gardeners also know corn earworms as tomato fruitworms. These pests will destroy the fruit by burrowing into the tomato. The small larvae complete their development inside the tomato while feeding.

More information on garden pests and control can be found by visiting Alabama Extension online. Gardeners can also contact county agents or call the Master Gardener Helpline at 1-877-ALA-GROW (252-4769).