Voters go to the polls on March 30 in Senate District 14 to elect a State Senator. Thursday, March 25 is the last day you can apply for an absentee ballot in Bibb County. The outcome of this Senate election could have an impact on the redistricting process that will happen later in the 2021 calendar year and affect how Bibb County is represented in the State Legislature for the next 10 years, until at least the 2030 census. 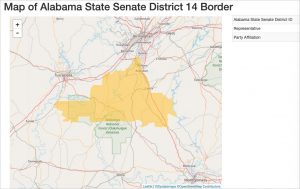 Senate District 14 has geography that includes all of Bibb and parts of Shelby and Chilton County.

You can view a better map map of the district below.

All of Shelby County that lies West of I-65 is within Senate District 14 and that includes the cities of Helena, Calera, Pelham, Alabaster,  Montevallo, and Wilton. The Shelby County vote has power in the numbers of potential voters.

April Weaver is easily favored to win the race in her home county of Bibb, however, she also has strong support in Shelby and Chilton because of her previous record of service in the Alabama legislature as a representative for House District 49.

There are two other candidates in the Republican primary facing Weaver. Donna Strong and Joseph Barlow are both Shelby County residents. The 3 candidate race may result in a runoff and Weaver’s chances depend on a strong voter turnout in Bibb County and Chilton County to outweigh the number of votes that are likely to be cast in Shelby County for the other candidates.

Another factor in this race is the Senate race is the only race on the ballot in Bibb and Chilton counties while in Shelby there is also a race to fill the House vacancy left by the ascendancy of Matt Fridy to the Alabama Court of Appeals. The Matt Fridy vacancy race will be an additional draw to get Shelby County voters to the polls.

The last special election (August 4, 2020) to fill the vacant seat for HR-49 saw an extremely low voter turnout in Shelby, Bibb and Chilton Counties when less than 5% of registered voters turned out to vote.

Bibb County voters should not ignore the importance of this special election. If you are unable to vote in person don’t forget the absentee ballot rules that may allow you to apply for absentee. Your vote will count in this important election.

Stand up for Bibb County and vote.

2022 Southeast U.S. Vegetable Crop Handbook – Back and Better Than Ever!