AUBURN UNIVERSITY, Ala. – The approaching deer season is on the forefront of almost every hunters mind. With the excitement of a new season, hunters need to be aware of a potential new threat to Alabama’s deer herd in order to ensure abundant deer populations in the future. The biggest concern facing Alabama deer herds is chronic wasting disease (CWD).

Chronic wasting disease results from misfolded prion. These prion are a mutated form of a normal protein located in the central nervous system. They infect the animal, mutate their normal proteins and degenerate their brain cells. CWD is fatal, attacking the animal and continually progressing. Currently, there is no known way to treat the disease.

“The disease was first discovered in a captive research population of mule deer in Colorado in 1967,” said Alabama Extension Specialist Mark Smith. “Unfortunately, it has spread significantly since then.”

Although there have been no recorded cases of CWD in Alabama, professionals have found several cases in Mississippi and Tennessee. Hunters, especially those who hunt in other states that have chronic wasting disease, need to be aware of the disease in order to reduce the spread to other animals and into the state. People can find CWD in both captive and free-range deer across several states as well as Canadian provinces.

It is important for hunters and wildlife enthusiasts to watch for the signs of CWD. Watch for deer that are emaciated, have difficulty moving or standing or exhibit lowering of the head. Other signs to watch for include tremors, listlessness, lack of wariness and excessive salivation and urination. These all may be signs of a deer with CWD. However, keep in mind that deer may experience some of these same symptoms because of other injuries or disease. For free-range deer, it may be harder to recognize these symptoms on first glance.

“The only way to determine if a deer has CWD is through a postmortem examination,” Smith said. “People collect tissue samples from the brain stem and lymph nodes from the throat and send them to a lab for analyses.”

Although the belief is that humans cannot contract the disease, the Centers for Disease Control and Prevention (CDC) recommends to not consume the meat from a CWD-positive deer. 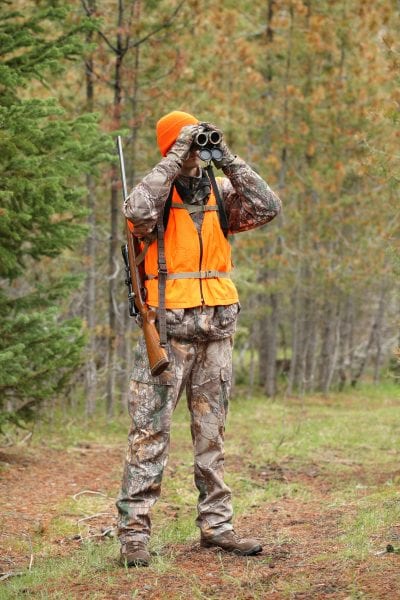 Along with knowing how to identify signs of CWD, there are four other steps hunters can partake in to prevent the spread of the disease. Smith said the first of these steps is abiding by the law.

Hunters can import the following:

All of these items must have no tissue present in order for people to legally bring them into Alabama. Velvet-covered antlers are prohibited unless they are part of a finished taxidermy product.

The second step hunters can take is to continue to monitor for the disease.

If someone notices a deer that appears to be sick or diseased, they should immediately call their regional Wildlife and Freshwater Fisheries Division office or submit a sick deer report online at Outdoor Alabama.

The third step is reporting transport of live deer, elk or other cervids on Alabama’s roads and highways to Operation Game Watch at (800) 272-4263.

The fourth step hunters should take is keeping up-to-date on the most current laws and regulations. Continue to monitor the spread of CWD and follow the current regulations in place to contain the disease.

It is crucial to protect Alabama’s deer herd to ensure plentiful hunting seasons for years to come. For more information on CWD, visit the Alabama Extension website at www.aces.edu. Also, check out www.outdooralabama.com to learn how you can assist the Alabama Division of Wildlife and Freshwater Fisheries in preventing the disease in Alabama.

2022 Southeast U.S. Vegetable Crop Handbook – Back and Better Than Ever!