Home Featured Blogs Wearing a Mask: Show That You Care

AUBURN UNIVERSITY, Ala. – The idea of wearing a mask has been a somewhat controversial issue. Some Americans question the effectiveness that wearing a mask has on the prevention of spreading or contracting COVID-19. For Alabamians, Governor Kay Ivey recently extended the Alabama mask mandate until at least August 31. Professionals from the Alabama Cooperative Extension System and Auburn University discuss the science behind wearing a mask and how this act can help in the battle against COVID-19. 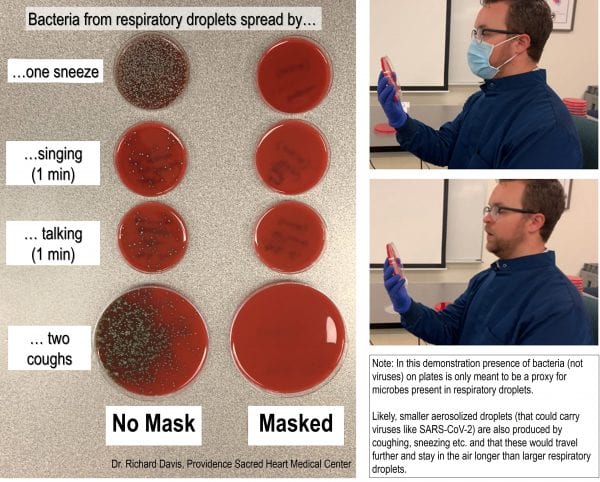 In a series of Twitter posts that went viral, Dr. Richard Davis, the clinical microbiology lab director at Providence Sacred Heart Medical Center in Spokane, Washington, showed two demonstrations where he tested the effectiveness of wearing a mask.

“First, I sneezed, sang, talked and coughed toward an agar culture plate with or without a mask,” Davis posted on Twitter. “Bacteria colonies show where droplets landed. A mask blocks virtually all of them.”

For the second demonstration, Davis said on Twitter he set open bacteria culture plates 2, 4 and 6 feet away. He then coughed hard for approximately 15 seconds. He then repeated this without a mask.

“As seen by (the) number of bacteria colonies, droplets mostly landed less than 6 feet, but a mask blocked nearly all of them,” Davis said.

How Can Wearing a Mask Help with COVID-19?

Ken Macklin, an Alabama Extension poultry science specialist and professor, said the demonstration from Davis shows that bacteria can exit a person’s mouth in the water droplets that come out when they sneeze or even breath. 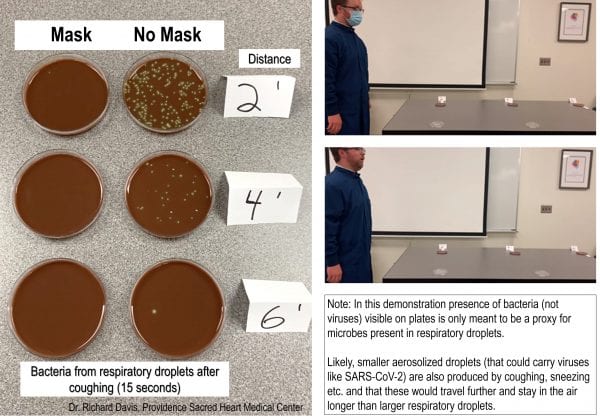 “This demonstration shows how much bacteria can be spread. Imagine how far a virus like COVID-19, which is 100 times smaller than bacteria, can go,” Macklin said. “Not only can they go further but there will also be more virus on each respiratory droplet.”

Dr. Fred Kam, the medical director of the Auburn University Medical Clinic, said while it helps prevent both the spreading and contracting of the disease, the idea of wearing a mask deals more with preventing the spread of COVID-19.

“For a non-healthcare worker, it (wearing a mask) is more about reducing the spread from the person wearing the mask to others,” Kam said. “This is especially true for people who are asymptomatic.”

Kam also said the science exists that backs up the preventative benefits of masks and is better than the science for physical social distancing or contaminated surfaces.

In the demonstrations where Davis was wearing a mask, only one of the plates showed having bacteria, and it was minimal. According to Macklin, this shows wearing a mask can reduce the number of respiratory droplets that leave the body.

“The mask was able to catch the droplet and the bacteria that was on it,” Macklin said. “In the case of COVID-19, even though there might be more present if cultured because of the virus being smaller than bacteria, it would be significantly less than what would be seen from an unmasked person.”

Will Any Mask Work?

Because COVID-19 spreads predominantly through the respiratory tract, Kam said any facial covering will help. However, some are better than others.

Kam advises people to choose a facial covering that they can tolerate consistently and comfortably for the full amount of time that they know they will have to use it.

Show That You Care 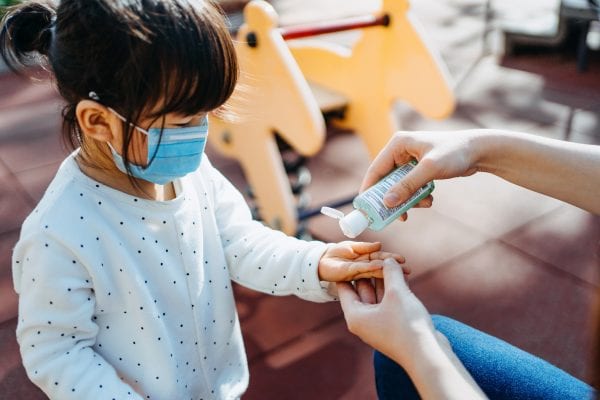 “Additionally, wearing a mask shows that you care about service workers and business owners, whose lives or businesses will get disrupted if they end up getting infected,” Kam said. “It also shows that you care about first responders and healthcare workers, who have to care for patients with more severe complications of COVID and put their own welfare and those they love on the line every shift.”

For more Alabama Extension resources on COVID-19, visit the website, www.AlabamaReady.info. For more information, visit the Centers for Disease Control and Prevention’s website.

EPA Approves New Chemical for Use in Mosquito and Insect Repellents

ABOUT US
We are The Bibb Voice Corporation, The Bibb Voice, The Bibb Blast, & Bibb Live | The web-based community media voice of Bibb County, AL | Organized and operated as a tax-exempt non-profit 501(c)(3) corporation | Mailing address: P.O. Box 427, Centreville, AL 35042 |
Contact us: editor@bibbvoice.com
FOLLOW US

© 2020 The Bibb Voice Corporation
Site designed and hosted by the artisans at Alabama’s Centreville Tech.