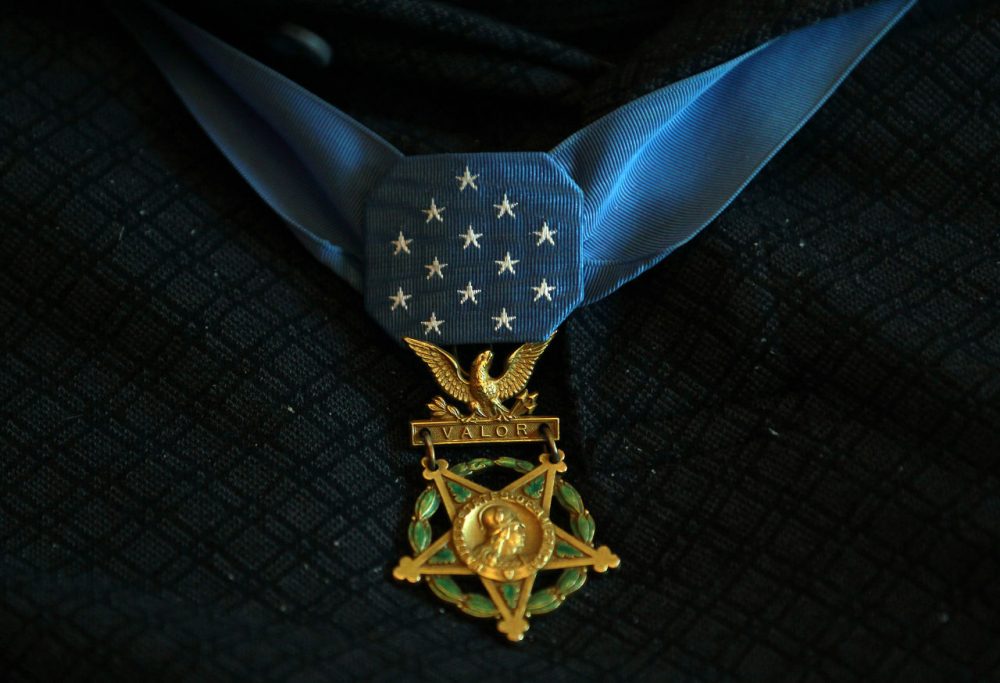 In 1945, Marvel Valley, Bibb County native Ross Franklin Gray was a 25-year-old Marine Corp Sargent stationed in the pacific theater during World War II. He joined the Marines in 1942, and on February 21, 1945, found himself leading a platoon at the Battle of Iwo Jima – one of the most notoriously brutal and pivotal battles of the war. In April, 1946, he was posthumously awarded the Congressional Medal of Honor for his actions that day.

Photos and a video of the 1946 award ceremony are presented at the bottom of this article.

Below is the account of the incident according to Marine Corp records. From Marine Corp University:

On 21 February 1945, two days after D-Day on Iwo Jima, Sgt Gray was acting platoon sergeant of one of Company A’s platoons which had been held up by a sudden barrage of Japanese hand grenades in the area northeast of Airfield No. 1. Promptly withdrawing his platoon out of range of the grenades, he moved forward to reconnoiter. He ascertained that the advance was held up by a series of enemy emplacements connected by covered communication trenches and fronted by a mine field.

Through a hail of enemy small arms fire, Sgt Gray cleared a path through the mine field up to the mouth of one of the fortifications, then returned to his own lines, where with three volunteers, he went back to the battalion dump and acquired twelve satchel charges. Placing these in a defilated area within his platoon he took one weighing twenty-four pounds, and covered by the three volunteers, advanced up the path he had cleared and threw the charge into the enemy position sealing it.

Immediately brought under fire from a machine gun in another opening of the same position, Sgt Gray returned to the defilated spot, obtained another charge, returned to the position and completely destroyed it. Spotting another emplacement, he went through the mine field for the seventh and eighth time to get another charge and destroy another enemy stronghold.

He continued this one-man attack, all the time under heavy small arms fire and grenade barrage, until he had destroyed six enemy positions. At one time a Japanese grenade landed so close to him that it blew his helmet off. Throughout, he went unarmed so that he could more easily carry the charges and accessories.

When he had eliminated the six positions, Sgt Gray disarmed the whole mine field before returning to his platoon.

Although he remained unscratched through his twelve trips back and forth among enemy mines, constantly under heavy fire, Sgt Gray was killed six days later, on 27 February 1945, by an enemy shell which inflicted fatal wounds in his legs.

For his personal valor, daring tactics, and tenacious perseverance in the face of extreme peril on 21 February, Sgt Gray was posthumously awarded the Medal of Honor by President Harry S. Truman.

The coveted award was presented to the hero’s father by Rear Admiral A. S. Merrill, USN, then Commandant of the Eighth Naval District, at the football field at Centerville High School in the presence of the Governor of the State of Alabama, Chauncy Sparks, on 16 April 1946.

Gray remains Bibb County’s only recipient of the Congressional Medal of Honor.

Through work with the Department of Veterans Affairs and association with the Gray family, retired Veteran’s Service Officer Roger Kinard came into possession of Sgt. Gray’s medal and original citation. Figuring that “he was from more up there anyway,” Kinard donated the items to the Cahaba Lily Foundation in West Blocton, since they were the only local place with a sort of museum. Since finding out that the Board of Education building has a “Wall of Fame” for Bibb residents, Kinard has been trying to get Gray represented upon it.

“It’s been about three years,” Kinard said, “and I finally decided I’d just do it myself. I borrowed the items back and had copies made and framed.” The copies are what now hang in the Board of Education.

Kinard said that Superintendent Duane McGee made sure to find Gray a place of honor and high visibility to guests. He also said Chuck Elkins did the framing for free, adding, “He said, ‘Ross F. Gray has paid that debt.'”

Now, 73 years after Ross Gray’s father was presented his son’s Congressional Medal of Honor at what is now Bibb County High School, anyone visiting the Board of Education building next door to the school can stop and honor a man who saved unknowable lives, and ultimately gave his own during WWII. A man born, raised, and buried in Bibb County.

Below is a film of the actual award ceremony in 1946, on the BCHS football field. The original high school gym appears in the background. The film was taken by Jerry Pow’s father and many years later transferred to video courtesy of David Daniel:

All photos here are believed to be taken by Dozer Meigs. Do you recognize anyone? Were you actually there? Comment and let us know!